When home dealing with my father’s health crisis, I got the unusual chance to spend three days alone with him in Philadelphia. Due to weather and back to back appointments at the prestigious UPenn Medicine hospital, my dad and I decided to get a hotel near Philly. Now, the days were full of appointments, but lets remember – I got my sense of adventure from my Dad. We made the most of the first father/daughter trip we had taken in decades to explore what the city of Brotherly Love had to offer.

The number one thing both my dad and I wanted to experience was a good, authentic Philly Cheese Steak. We arrived in Philadelphia in a snow storm for a 1pm appointment with the oncologist. We made the appointment, but also made sure to survey the staff for the best cheese steak place in the area. Most agreed, Jim’s Steaks was the place, and it was walking distance from the facility we were at. Well, it was if you didn’t walk four blocks in the wrong direction in the snow. You see, I didn’t want to get my phone wet, so I checked the directions and then started walking. Four block later, I decided to check and see how much further, and saw my mistake. Opps. This Californian decided she had enough, and called a Lyft to take us to Jim’s. 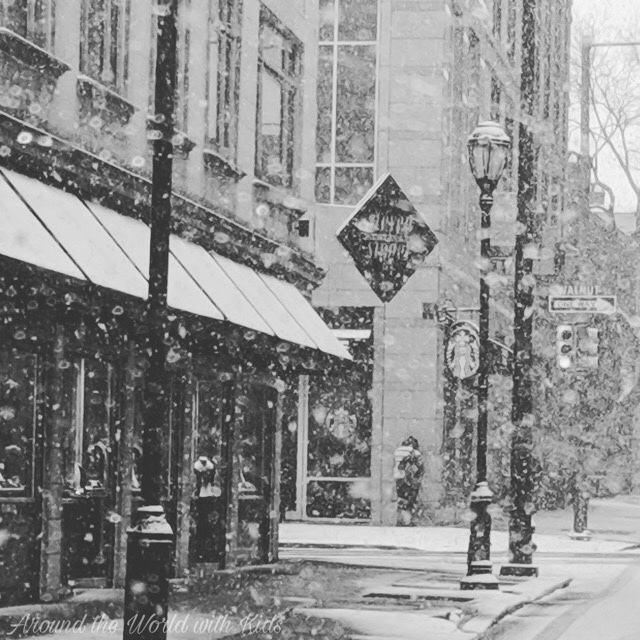 There was a lot of snow, I don’t know why we thought walking was a good idea…

10 minutes and $6 later, we were in front of Jim’s and went in. We both ordered cheesesteaks with Wiz cheese, because the grill master said that was the way to go. I got grilled mushrooms and onions, and my dad added grilled peppers. Then we got our sandwiches and drinks, walked through the kitchen, and then went up the stairs to the sitting area. From here you could look up and down South street, and we could sit and eat our heavenly sandwiches. They were greasy, messy, fatty, and full of the bad for you flavor you expect from a Philly Cheese steak. I’d like to say I was good and couldn’t finish the whole sandwich, but I’d be lying. I devoured it. Dad did too. Hey, the doctor said he had to keep up his weight… 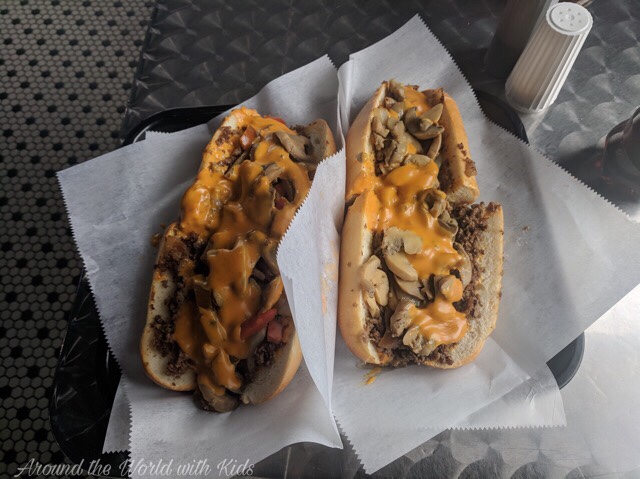 Gold at the end of the rainbow, or in this case two sandwiches full of greasy, cheesy goodness.

Philadelphia is know for it’s Revolutionary War history. The Liberty Bell was created by a London firm in 1752 and was meant to symbolize liberty throughout the land. There is a famous story that it was cracked after it’s first ring in it’s arrival in Philadelphia. Today it’s housed in a glass building, for which you have to go through security to enter. Once inside, you can actually get quick close to the bell, and many did, taking pictures with the bell as the famous backdrop. For me, I loved that behind the bell one got a beautiful view of Independence Hall, the famous building where the constitution was signed. The two symbols of American perseverance back to back helped build my own strength for the challenges ahead of us. 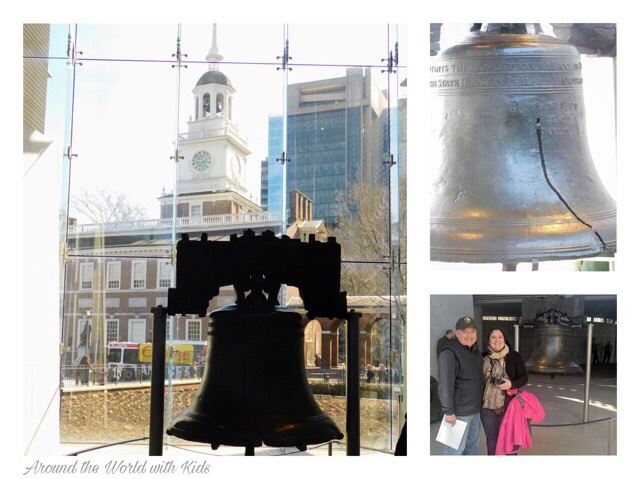 Next we crossed the street and went through security to see Independence Hall. Once through, you can see the building’s courtyard and read the historic plaques. But you can not enter the building unless you join one of the tours. Unfortunately, the line was long, and we didn’t have time to do a full tour, so we settled for a few selfies, some history reading, and admiring the beautiful old building

The grounds of Independence Hall are now behind a security barrier, but you can also join the long line to tour it, if you have the time

As we walked back to the doctors office, we walked through Washington Square. We had driven around the previous day, lost and when it was full of snow. So I almost didn’t recognize it. But while cutting through the park we came across the monument to the soldiers buried below us in unmarked graves due to the fight for our freedom. Today it has kids biking and scootering along, people sitting on benches and reading, or busy people like us rushing through the well worn path. But beneath our feet were the bodies and souls of brave men who came before us. And I realized we were on hollowed ground.

Our last day in Philadelphia, my dad had an important test he needed to get done at the hospital. It was important and required he didn’t eat, so with our nervous energy (and really nothing to do if he couldn’t eat), we got to the hospital almost two hours before his test. They informed us that he likely wouldn’t be taken back early, so it was best if we found something to do. We didn’t want to go far, so the receptionist suggested we go to the gift shop and get a guide to take a tour of the historic part of the hospital. History…we are in.

The Pine Building is the original building the of Historic Penn Health system, and the first hospital in the nation. When you walk from the modern wing into the Pine building, it’s like walking into a different era. The floors are marble, the staircases wooden and grand, and there is art on the walks and in the hallway. It’s not sterile or harsh, its’ warm and inviting. I wish hospitals still felts that way.

Hospitals don’t have this grand an entrance anymore…

Following the guide, we went up to the second floor and went into the first medical library in the United States. It was a grand old library, built of wood, with tall shelves, old texts, and chandeliers. You could imagine students and doctors of old, sitting down at the table, discussing cases, and looking for volumes of texts that could help them on their research. Even today, there is a intercom in the center of the table, showing that doctors still to this day, gather around and discuss cases and the best way to treat them. I imagined my dad’s team of doctors who I met, discussing his case in a room like this and instantly felt better. 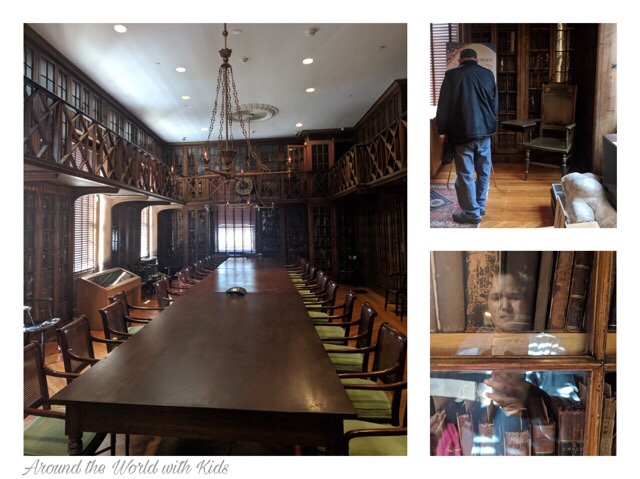 At the top of the stairs was the first surgical theater. In the room, you can see a large wood table, a box displaying the instruments that they used to use, and the stands all around, where doctors used to stand and watch to learn surgery. This still happens today, but in larger rooms, with more sterile equipment, and likely video cameras and microphones to a room behind glass. But it’s thanks to Penn and places that this that they surgeons of today learned from surgeons before them, who learned from previous surgeons before them, who may have learned standing in this room as a pimple faced boy. The room was beautiful, but I’m glad surgery has gone a different way.

Not sure that’s a table I want to be up on….

After my dad’s test, I brought him a snack, and we grabbed some food before driving back home. Partly, I was glad to head back to my kids, my mom, my grandmother, and my family who was anxious to see how the trip went. I wanted to get home because I knew that meant we would soon start treatment on this journey to have the cancer behind us. But I had enjoyed this time with my father. This one-on-one time that we rarely every get anymore. Lives get busy, and with kids, work, spouses and other things, we never get to spend time just the two of us. But even with all that was happening around us, my dad and I could not kill that sense of adventure and wonder, and we made sure to explore and make the most of that time. I made my dad promise we’d come back, after the treatment, and show the kids Philadelphia the right way. And I can’t wait to write about that trip and share it with you.