When people hear Malta, they often are only thinking about the island of Malta. But the country of Malta is actually made up of four islands. Gozo is the second largest and second most populated of the four islands (the other two have little to no people living on them). The island is small (26 square miles) and scarcely populated (47,000 compared to 475,000 in Malta), but it has a unique character all to itself. The beauty of the rural, slower pace, warm people of Gozo stayed with us, even during our short stay on the island.

R and her sister found a company who took our group on a 8 hour private tour of Gozo. The minibus picked us up from the apartment, and then we drove over to Cirkewwa to take the ferry over to Gozo. The ferry is a large boat that takes both cars and passengers from Malta to Gozo in 20 minutes. We got aboard the 9 AM ferry, and settled into seats on the outside to watch as we rode over.

All ready for our morning ferry ride

On the ride over we passed by the island of Comino. This is the small island between Gozo and Malta. It currently has 3 people living on the island, an older woman and her two nephews. They farm a small piece of the island. However, apparently during summer it’s popular for the Blue Lagoon beach, where many films are shot. But on our ride over, we got to see the amazing cliffs and inlets on this beautiful but basically deserted island.

The beautiful cliffs of the island of Camino

Finally, we pulled into Gozo and you could see the city of Mgarr. The church, ever present in all cities in Malta, towered above, as you saw the city. Instantly you could see Gozo was going to be different. You could see the vast amounts of green and farm land. The smaller feel to the towns. The separations between villages that didn’t exist in Malta. We could tell right away today was going to be special.

The site as you pull into Gozo

Well…kind of different. Some things are different. Some things always stay the same. We ran into our first issue as we went to the van. We had arranged a car seat for the baby, but it wasn’t installed yet. So first I went to install it, rear facing as is recommended for children under two. But…the seat wouldn’t recline. I pulled the lever but nothing happened. I handed it to M, who also couldn’t get it to recline. R and M took a look. As people who have installed many car seats they knew 1) it was supposed to recline and 2) something was jamming it.

Male Drivers gathering around: “No, just install it the other way”

M: “No, she’s too small. She needs to be rear facing. And it’s jammed, it needs to recline”

R: “If you get a flat head screw driver, I think I can fix it”

Male Drivers: “No, nothing is wrong with it”

Much arguing ensues. Finally they bring over a screwdriver.

R: “Give me the screwdriver, I can fix it”

Male Drivers: “Don’t worry, we can do it”

Start fussing around clearly not knowing what they are doing

Finally at some point they gave her the screwdriver. Two minutes later M is bringing the reclining seat into the car. Now the male driver tries to install it incorrectly.

M: “Just give it to me. I’ve installed way more car seats than you”.

The Male driver, finally learning his lesson, lets go and M installs the car seat properly. Only 20 minutes late we are on our way

Don’t mess with my mama and aunties. They know car seats…

Our first stop was the Ggantija temples. These pre-historic temples were created ~3600 AD and are older than the pyramids in Egypt. When farmers were clearing there lands, they found that some of the rocks seemed too big to move. When archeologists came out to inspect they realized their find. The spot has been preserved and is now a UNESCO World Heritage site. It is quite amazing to look upon these structures. Surprising well preserved, these giants rocks were brought over by rolling them on smaller rocks, and using ropes and pulleys to erect them. We had the opportunity to walk around the smaller and larger temple and see the structure, the alters, and the patterns that were once intricately inscribed.

Giant ancient rocks that make up the prehistoric temples

Look closely at the top picture, you can see the swirl design that is below

Just outside the temples, there was a lovely little shop which sold handmade wool and silk products along with other souvenirs. In the shop we found the sweetest coat for baby D, along with jewelry and a silk scarf for me. The store owners took pride, most of it being their work. And they loved taking out stacks of stuff for us to look at and try on. They gave us advice on colors, fit and style, and the pride and graciousness shined through. After spending more than a few euros in the shop, we waved good bye and went on to our next stop.

Our next stop in the tour was the scenic lookout at Calypso Cave. Here you could see down to the caves. The entrance has been deemed hazardous so you can no longer go down. But you can look out and see the beautiful Mediterranean. You also can look out and see Ramla Beach, one of the beautiful sand beaches on Gozo. Unfortunately, the weather, while sunny, was far too cold or any real sunning on the beach. So I had to settle to looking at the beach in the distance. 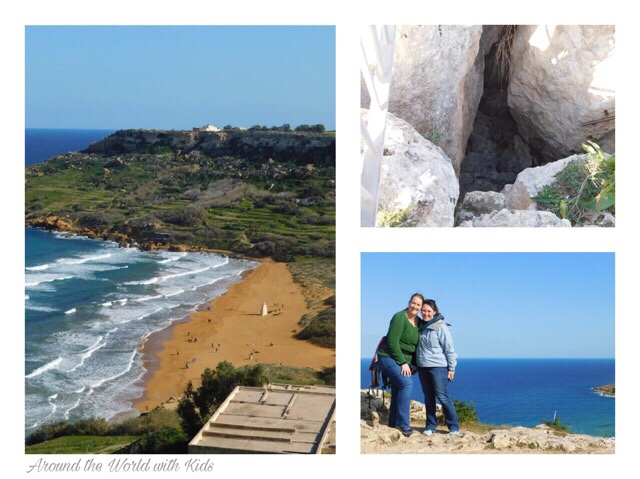 Loved the views from the Calypso caves, but the stairs down look a bit dangerous

As we continued our drive, we drove past some salt pans and stopped to take a quick look. Originally created by the Romans (when they had the island), pans work by collecting water from the choppy waves during the winter. Then, in the summer, the water in the pans dries out, and the villagers collect the salt, clean it, and then package and distribute it. As you can imagine, I brought some it home for my foodie husband. 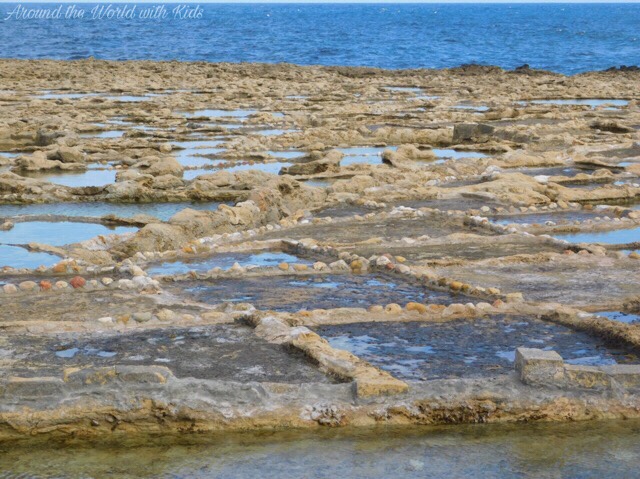 A short drive up the hill took us to the majestic Bażilika-Santwarju Nazzjonali tal-Madonna Ta’ Pinu, a basilica dedicated to the Virgin Mary. Considered one of the most sacred in Gozo, and since most of the population is Roman Catholic, the guide insisted that every good citizen of Malta who visits the island makes a stop at Ta’ Pinu to pray. We made our stop, and I must say, I loved praying and being in this church. Growing up Catholic and living close to our town’s Catholic Church, this one, even given its impressive size and decoration, made me feel at home.

In front of one of the most famous churches in Gozo

So many unique features inside the basilica

Right outside the church was lovely vendor who sold strawberries, jams, candies, liquors and other specialities. Since we were a bit hungry, we got some food. The proud owners showed us all their specialties and let us taste some of the food. The were warm and sweet, again showings the pride they had in the food they were making and serving. We couldn’t help buying food to take home, and snacks to enjoy in the bus.

We decided for lunch to sit at a nice place and eat the sandwiches and snacks we packed for our lunch. The bus took us to the inland sea, a natural lagoon joined to the ocean by a natural tunnel that runs through the cliff. The beach was a rocky beach, but was calm and quiet, and perfect place to sit and have a break. Baby D had a great time picking up rocks, climbing, and exploring the beach. We enjoyed the peace, the scenery, and the little bottles of wine we brought to eat with our lunch. 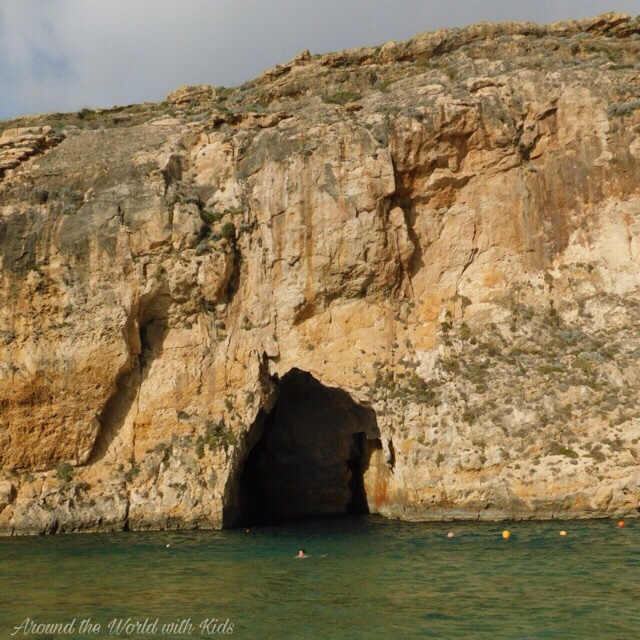 We all relaxed, enjoying lunch and having a little downtime

After lunch we saw a little glass shop, and we stopped in to check out the famous Gozo glass. As we shopped, little D ran around outside, and played with soaps inside (but we all watched her very closely around the glass). As we wrapped up our purchases, we started to notice a rain cloud coming in we went back to the minibus.

Rain come down on our vacation but we still had another stop and we weren’t going to let that get in the way. So we continued on to the Cittadella, and imposing Citadel that sits at the top of a tall hill. First built in 1500 BC and further fortified in the 15th and 16th century (after it proved ineffective in the Turk invasion), it contains churches and other historic buildings. But the best part about it is to go up to the wall to see the view. From the top you can see all around the small island, and you can understand why the location was picked.

The Cittadella that sits at the top of the hill

The views are spectacular

Of course, it was pouring by the time we went, and we were walking entirely on slippery limestone. Somehow, some way, we all managed to stay upright and not fall on the way up or down. I lost my footing a few times, but was always able to grab a hand hold and not fall down. Feeling smug, on our last down hill I walked with confidence knowing we were now on a road that was textured and I would be fine. I then stepped on the painted road line, and promptly wiped out and fell on my butt within sight of the mini-bus. Good times…

As you can see, it was really wet, it’s amazing I lasted as long as I did before I fell

The bus took us back to the ferry, where we decided that the warm cafeteria inside was a better bet for the ride home. We drank some warm drinks, chatted, and decided we deserved a nice evening in for dinner, with copious amounts of wine and drink. But we all agreed that Gozo was the place to be, with its warm people, quiet pace, and spectacular views. Malta is fun, but Gozo is the heart of the Maltese people. 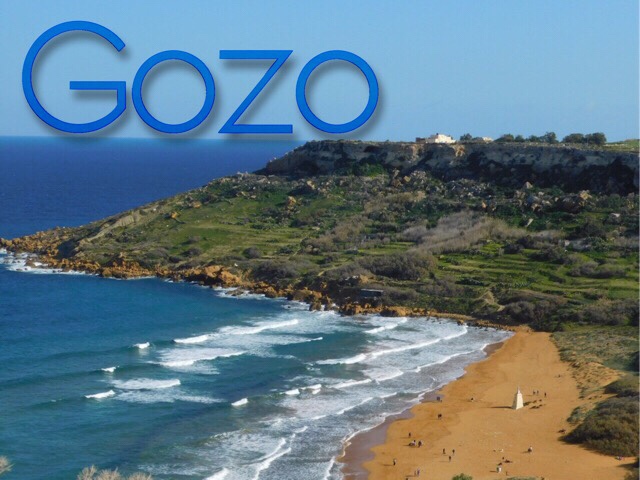 This was a stop during my Girls Trip to Malta