“Look at the giant bottle of ketchup!”

“Are we really going to see Mr. Rodgers?”

“Can I push the button?”

This was just some of the things the five extremely excited children shouted as we started to enter the Senator John Heinz History Center in Pittsburgh, Pennsylvania. During a quick trip to the city to visit family, My husband’s cousin V and I thought it would be a good idea to bring our children, and one other cousin to the museum. V’s children were currently very into Mr. Rodgers and he told the kids the original set was in this museum. They were sold. My kids grew up more on Daniel Tiger, but I’m an adventurer and their cousins were coming along, so they were sold. So we took two cars and five very hyper children between 3 and 9 to a museum in downtown Pittsburgh with four very tired adults.

Excited to head into the museum!

Built in a century old building in downtown Pittsburgh’s Strip District, the museum is part of the Smithsonian and features six floors of permanent and changing exhibits. It’s the biggest museum in Pennsylvania and dedicated to the history of Western Pennsylvania, which has a rich history of steel, factories, and education. 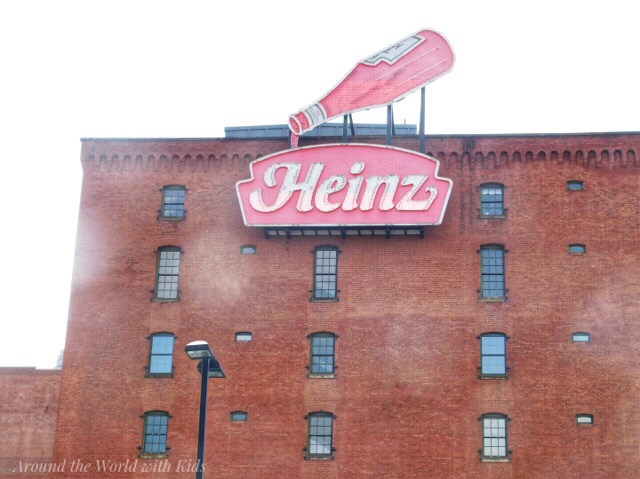 Housed in a beautiful old building, the iconic Heinz sign lets all around know you are in the right place

As we entered the building, it was immediately clear this museum was designed to attract and teach children in an entertaining way. The main entrance had a number of historical vehicles, including a street trolley the children were encouraged to climb around in. Then, there was an a kids only area called Kidsburgh. Children could run up the stairs to the child focused room. There they could play with trains and cars in a mini Pittsburgh, play with the food and grocery center, or go down the “Kidsburgh Tunnel”, a large windy slide. Below was a café, and parent could sit with a coffee and watch there children through the windows or the screen that showed a live stream of what was going on in the kids only room. Once we were able to pry the kids away from “Kidsburgh”, we made our way up to the X floor to see Mr. Rodgers Neighborhood.

Some beautiful old vehicles right in the entrance, including a trolley children are encouraged to play in 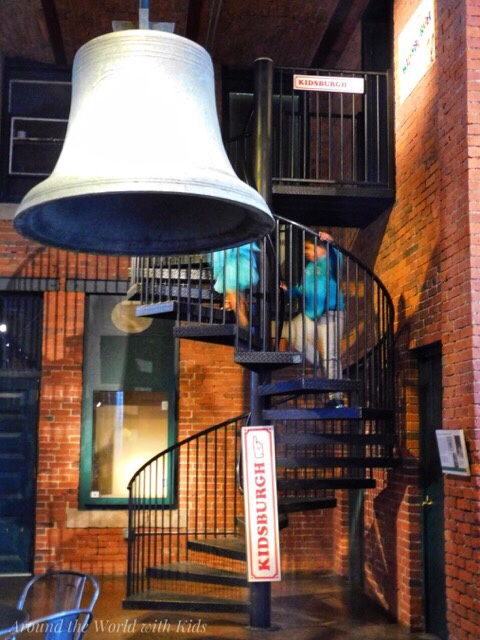 The kids LOVED having a private play area for just kids

Fascinated with the set, and the history of their beloved Daniel Tiger

Afterwards we went around the corner to the Heinz Exhibit. The kids were drawn in but the ketchup bottle made of ketchup bottles (yes, really). While that was kind of neat, I actually enjoyed looking at all the different packaging that Heinz had throughout the many many years it’s been in business. There was also a section that showcased Heinz sub brands around the world. We used this as a lesson to show all the kids the brands of the different countries they’ve visited and where their fathers were born.

Learning the history of Heinz, the brand and even the man

From there we jumped down the stairs and across the yellow bridge to the Discovery Center. Here is a very child focused area of the museum. It’s completely interactive with computer screens, Daniel Tiger episodes, and a fun board game, and that’s just in the first section. When you go the back section, your child gets to be a scientist, making things fly, using colored lights to make shapes, finding patterns in test tubes, and of course building giant creating with large foam blocks. The bigger kids in the group loved this so much, they spent most of there time here, and it was hard to drag them out.

The children became scientist and innovators in the Discovery Center

I wanted to see some of the history part of the History Museam, so after a while I left the husband and bigger kids to go down to the Tradition of Innovation Exhibit just below the Discovery Center. I walked around 1940s and 1950s Pittsburgh learning about the start of public television, the Rosies who built ships, and even about the scientist who created the CPAP machine right here in Pittsburgh. There were many other pieces and I would have loved to spend longer in this section, but the three older kids wanted to go to the bathroom and time was running out.

After finding the bathroom and going down to the café to meet the rest of the group, we gathered the five very hyper children through tears and protests to head out. V and his family had a flight to catch, and we had dinner plans. So we all reluctantly went out of the museum and loaded into the cars, excited to have learned about Pittsburgh and hearing the kids beg us to come back again soon. 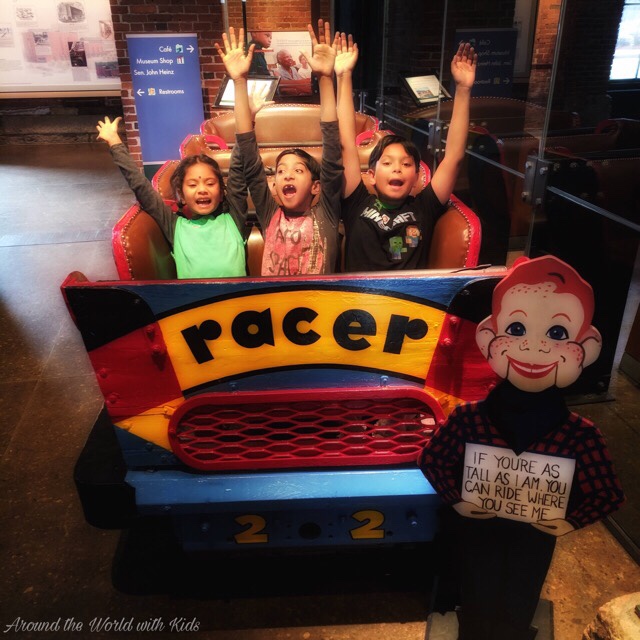 Fun for all in this awesome museum!