The whole trip to LA actually came about because we got to know that one of our family members we love getting together with, was going to be spending a week in LA to visit relatives and attend a wedding. We really wanted to see them, and instead of a flight away, they were now a short (ish) drive away. We could do that.

So on a lazy Sunday morning we found our way into the suburbs of LA county to visit family. It was my husband’s cousin, cousin’s wife, and their three boys, ranging in age 4.5 years to 13 months old. We were informed ahead of time that the house had a pool. My kids had wanted to show up in their swim suits and go straight in, but I managed to convince them to put on clothing and do a round of pleasantries first.

Last time we saw them, they were a family of 3!

The kids immediately went about the business of getting to know each other, as only children can do. The adults immediately went about greeting each other, and taking time to catch up and laugh like old friends do. However, with 5 kids around it wasn’t long before the chorus of “can we go in the pool yet?” overpowered the conversation. We decided to get the kids ready and take the conversation pool side.

As soon As in the water, I’m surrounded by clinging water bugs!

My children are intense water bugs. My son, who took years of swim lessons to get over his fear of the water, now is such a confident swimmer he loves being the water and loves the challenge of swimming in deep water. My daughter is uber confident, but doesn’t actually know how to swim. We put water wings on her to keep her safe, and she was off, swimming in the deep end with her brother because she had to keep up with him. 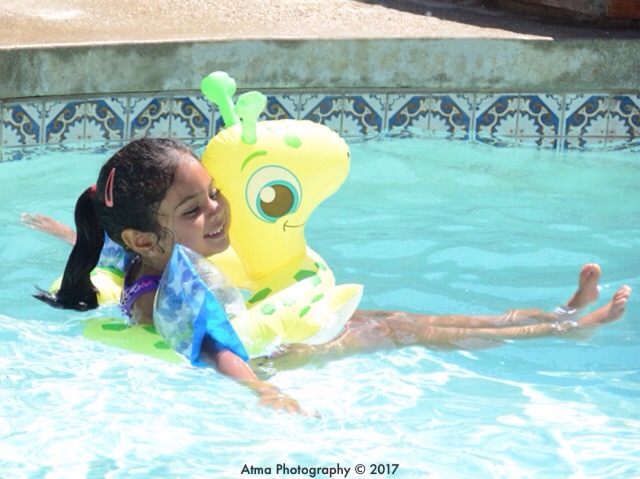 The 3 little boys observed my kids, but didn’t seem as excited about getting in the water. The middle one let me take him in for a little while before asking to go back to the side. The oldest was perfectly contented playing a game where he threw things in the pool and watched my son fetch them. The littlest was the most comfortable, letting me and his dad carry him around in the pool for quite some time splashing around. 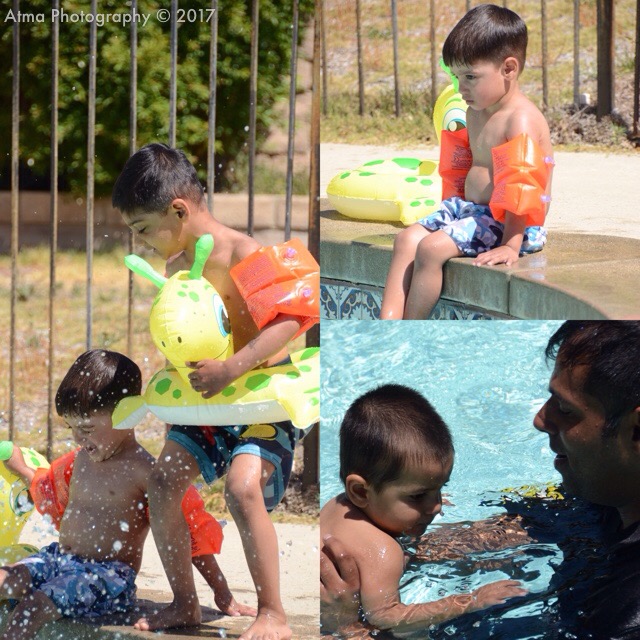 The adults enjoyed a nice, lazy afternoon lounging. Once I was in the water, I enjoyed the cool water to the hot sun, floating around with the kids. We adults sat on the side with our feet in enjoying the cool and the conversations while keeping an eye on the kids. My husband’s cousin and I got into the water for a while with the kids, partly to play with, partly to cool off from the 100 degree weather. 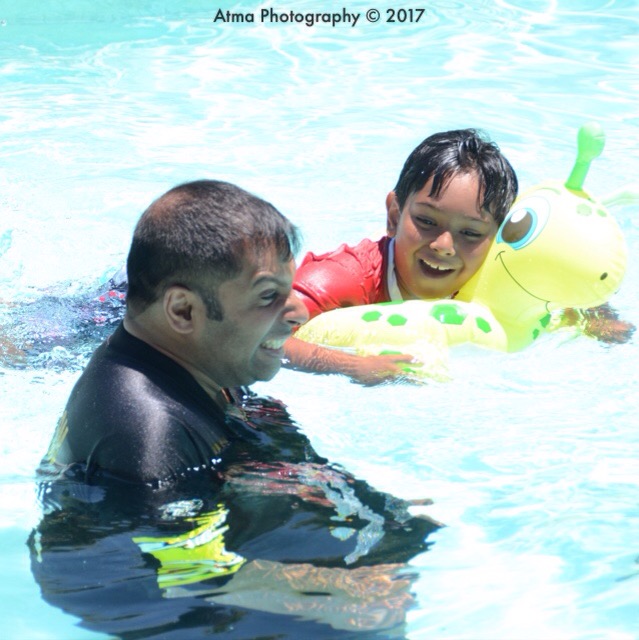 The water was a little colder than expected!

We took a brief break to eat lunch before my son and daughter ran back in. In the second session, we had one scary moment where one of the kids fell in the shallow end head first. He wasn’t able to get himself turned around, but thank fully enough adults were around that we got him right side up and out of the water in less than 10 seconds. He was slightly traumatized but not actually hurt thankfully. However, that was enough to for us to call it a day and convince the kids to get out of the water and get into dry clothing.

Afterward, the younger ones all needed a nap. I convinced my kids to take quiet time with some books. My daughter was out cold in no time. Meanwhile downstairs the adults took advantage of some kids-free time (seriously, when do actually get 5 kids all down at once and quiet!), and spent a good hour and a half talking, laughing at stories, and generally remembering why we love spending time together. Every time I’m with this cousin and his family, I am always in awe of how comfortable we are with each other. It’s as if no time has passed and we can pick up where we left off every time. Those are the best friendships, and to have that in family makes it even more special.

Of course the peace didn’t last too long, and soon we had 5 rested kids up and about. My son had not actually slept (he is 7.5 years old…) so he was actually quite cranky because he was so tired. We decided to head out so we could have another adventure in the area before heading home the next day. We gave everyone hugs, tried to make plans to meet again soon, and loaded up in the car. We waved good bye long after we left the street with a little bit of sadness in the departure, but happiness in the beautiful day we got together, simply enjoying the weather and the company.

The pool day was a splashing success!

One thought on “Pool Side Kind of Day”