We did a short stint in Pune our last week in India, and our very first stop (after the hotel) was Aga Khan Palace.

Aga Khan Palace is a large estate built in 1892 by Sultan Muhammad Shah as an act of charity for the poor hit by famine in the area.  However its most famous as the place the Mahatma Gandhi was jailed, and where his secretary, Mahadev Desai, and his wife, Kasturba Gandhi, died.  Gandhi is highly revered in India as the leader of the Indian Independence Movement and this museum is dedicated to the history of his time there.  It takes on an almost holy air as you go through the various rooms.

The Aga Khan estate has three main areas of interest, the main house which houses the museum, the samadhi, which house the remains of Gandi, Kasturba, and Desai, and the grounds which have been landscaped into a public park.

Posing in front of the palace

The house has several rooms where you can view exhibits, artifacts and photo panels that concentrate on the Indian Independence Movement, Gandhi himself, and his life during his imprisonment.  There are particularly emotional exhibits about the death of his secretary followed by the death of his wife.  Thankfully my normally loud son was asleep in the stroller.  While there was no quiet signs, most visitors walked through quietly and solemnly, with an unwritten understanding that this was sacred grounds.

The yarn spun from a handloom by the Mahatma Gandhi himself.

After the museum, we made the journey over to the samadhi.  There are two simple monuments where the ashes of Kasturba Ghandi and Mahadev Desai are buried.  Next to them is a private area where Mahatma Gandhi’s ashes are kept.  You must remove your shoes before entering either area.  By this point my son had woken up, so my husband carried him into the site and quietly explained why we were paying our respects. 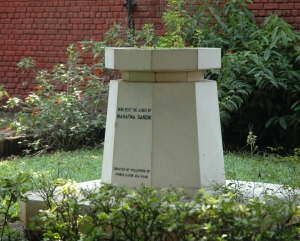 The ashes of the Mahatma rest here…

Afterwards we went over to the lovely manicured lawns of the estate.  It was a beautiful day so my son ran out his energy while I found a quiet spot to nurse.  The lovely garden was enjoyed by many visitors that day and it was a pleasant way to end our visit

Enjoying the freedom of the open grounds

All photos taken by Atma Photography

One thought on “Aga Khan Palace”