Unlike Disney World, where everyone knows there are multiple parks spread out over miles and miles, the Disneyland resort is actually in a very small, contained area. Many don’t even realize that there are two parks, not just Disneyland. Disney California Adventure Park was opened in 2001, and meant to highlight the beauty and diversity of California using the Disney and Pixar properties. Over time, the park has changed, and is the park that often emphasise the new, Disney and Pixar movies, and seems more hip, modern and accessible.

We thought we got a lot accomplished at Disneyland, but it seemed that we truly honed our efficiency at Disney California Adventure Park. We had set a priority to see two shows, meet two characters, and ride two rides. We hit all our priorities and much, much, much, MUCH more.

Disney Jr. Dance Party – Yes, my kids are 8 and 5, but they still love Disney Jr. and I’m not about to tell them it’s meant for pre-schoolers. They saw that Disney Jr. had a dance party and that became a priority to see that show. Even my shy son, got up, danced.  They enjoyed the appearances of Doc McStuffins, Princess Sofia, Timon, and Mickey. My children even made several appearances on the big screen!*

Frozen – Frozen Live at the Hyperion is THE show to see when you are in Disney California Adventure. This is an hour long, live action play of Frozen. It includes all the songs, and is a broadway-level production with sets, elaborate costumes and special effects. My kids don’t usually sit still for anything, but they were completely engrossed in the beautiful story retold in live action.*

Cruz Ramirez – While in Carstown, we were eating churros (at Princess Elena’s suggestion), and we saw Cruz Ramirez roll up to the Cozy Cone. We went to get in the forming line so we could get pictures with him. As we get up to the front, Cruz mentions something about having to leave soon. It was just a pre-recorded phrase but my tired, overwhelmed son immediately started crying. “We waited in this long line, and now she’s leaving!”. Us, Cruz’s handler, and the photographers all let him know Cruz wasn’t leaving and we could still take pictures. We managed to get some good pictures, but I felt bad for my son, who felt a little embarrassed.

Spiderman – We were in Hollywood town when we realized that Spider-Man was making an appearance. The kids got autographs, showed off their web slinging skills, and even Dad got in on the action

Captain America – Another priority was meeting an Avenger. Captain America was scheduled to be around Hollywood Land around the same time that Frozen was let out. We went over and made sure to get in line to meet with Cap. He was ever the gentleman, signing autographs and taking pictures with all.

Princess Sophia – As we were walking we saw Princess Sophia out greeting people. My kids have always loved her, so they needed to make sure to give her a big hug.

Elsa and Anna – If you have children of any age in the past few years, you have been inundated with multiple rounds of “Let it Go”. My children are no exception, and my daughter was even Elsa (complete with singing dress) a few years ago for Halloween. Meeting the Ice Queen herself was a dream come true. Elsa and Anna were engaging, sweet, had wonderful conversations with the whole family, and were the favorite of all the character visits we did!

The Little Mermaid – Ariel’s Undersea Adventure – This was a cute Disney ride that took your through the Little Mermaid story as told through animontroics. Great for the kids, not much excitement for adults or teens.

Radiator Springs Racers – This was everyone’s favorite ride. We used our FASTPASS to ride this, and I’m glad we did. All day long, I never saw a stand-by wait less than 60 minutes. You get in one of the famous Pixar Cars, and ride around in a seemingly tame indoor coaster, until you are set up for the race. Then the coaster takes you through twist, turns, and banks. It was flying along and the most fun everyone had. We wanted to ride again, but were not able to get another FASTPASS and the line never went down. I’m so glad we at least got to do it at least once.*

Cars Land – We rushed through Cars Land to get to Radiator Springs Racers. But as we walked out, we go the chance to admire what a truly amazing place it was. They had recreated the road in Radiator Spring, complete with the Cozy Cone, Flo’s and Luigi’s tires. It was fun to walk along and feel like you were in Radiator Springs*

Mater’s Junkyard Jamboree – This was fun little ride where you got to whip around in the tractors that Mader likes to tip over in the Cars movies. Don’t let this ride fool you, it can whip you around quite a bit!

Soarin’ Around the World – I had heard about this ride and I made this ride MY priority. You sit in a seat, and it takes you slightly off the ground, and puts in in front of a giant IMAX screen, creating the illusion that you truly are soaring in the air. Then it takes you on a spectacular ride through the Himalayas, the Taj Mahal, Iceland, Paris, and much more. It’s beautiful and you feel right in the action. The kids and I loved it. My husband is afraid of heights, and while you were never actually very high, it certainly felt like it. He thought the images were spectacular, but he kept having to look at the feet hanging above us so he could remind himself he wasn’t really that high.

Toy Story Midway Mania! – this Toy Story game used 3D glasses, and state of the art screens to zip you around and allow you to “shoot” pies, balls and other object at fair type games. All scores are kept, and you can compare how you did to your car-mate and others who rode at the same time as you. Turns out, my husband is pretty good at this game. 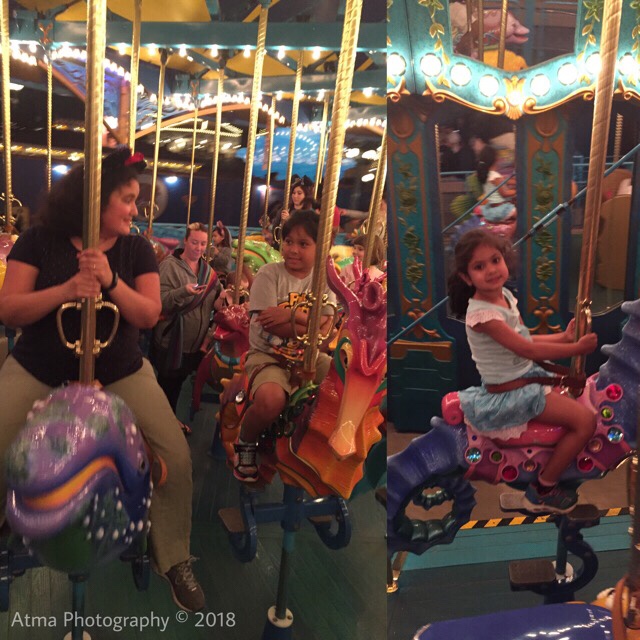 King Triton’s Carousel – After Toy Story Mania, we wanted something tame and this was right next store. Who doesn’t love a carousel made of up classic sea creatures?* 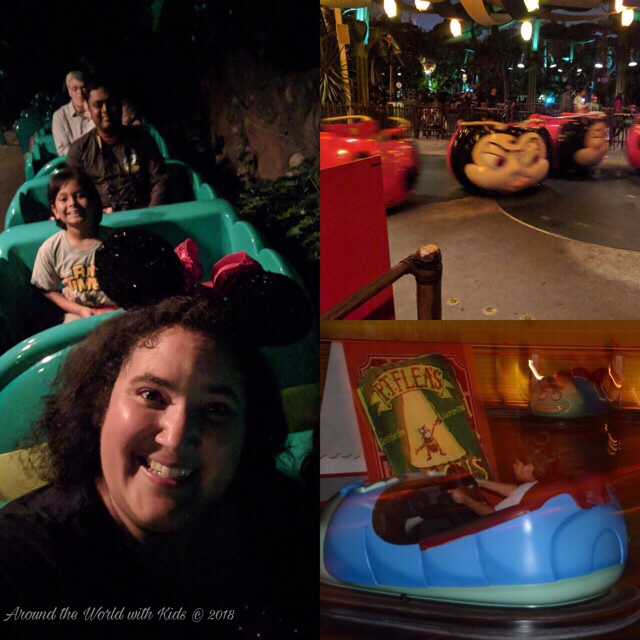 A Bug’s Land – We had some time to kill before World of Color. We wondered over to A Bug’s Land because it had a number of rides with little to no wait. We went on Flik’s Flyers, Francis Ladybug Boogie, Tuck and Roll’s Drive’em Buggies (where I let the 5 year old drive the car. What was I thinking?) and finally Heimlich’s Chew Chew Train. These are all rides made for little ones, but my kids had had enough excitement for the day, and were more than happy to get to ride serval rides with no waits, even if they were kiddie rides.

We had followed some advice to get online, and make sure to get FASTPASS tickets for World of Color. We wanted to get into the “good” viewing area. (Thought the best viewing areas are reserved for those who do World of Color dining packages.) The area had a nice view, and provided us the chance to get some spectacular shots of the water and lights display during the show that was true to it’s name.

This was beautiful watershow with jets of water, music, and of course, colored lights show*

Several times you had curtains of vibrant colors, as you see here*

While we had pretty good viewing area, it was a standing only area. That was fine for me and my husband, but the children could not see very well. My husband had my daughter on his shoulders, and me my son piggyback for a while to help them see. But my children are no longer light, and we couldn’t do it the whole show. At the end we were all tired and sore. And unfortunately ,we were at the complete opposite end of the park from the entrance. We had to walk all the way through the park, out the exit. We stopped at the World of Disney store to finish the last of our shopping, but that may have been too much. By the time we were done, we were all asleep on our feet. My daughter desperately wanted to be carried back to the hotel, but no one had the strength to do it. Every muscle in my body hurt. At one point we got to a red light and I started walking in circles. When my husband questioned me I told him, if I stop, I won’t be able to start again. We made it back to our room, where the kids climbed in bed not bothering to change into pajamas and fell asleep. I managed to change into PJs, pop some ibuprofen, and look at my fit bit as I climbed into bed. I had walked over 21,000 steps and close to 9 miles according to my Fitbit. No wonder we were all exhausted.

Every muscle in my body hurt…

We were all sad to pack up and leave the next day. Our days at the Disney Resort were over. But we still had more planned for our Great Southern California Adventure. And we weren’t done with amusement parks yet. We said good-bye to Disney, knowing we would visit again soon. We had been bitten by the Disney bug, and we won’t be able to stay away long.

This was a stop during our Great Southern California Adventure