Ever since I knew it existed, I wanted to take my kids to have breakfast with Disney Characters. And not just any Disney characters, I wanted to take them to have breakfast with princesses. Apparently, Ariel’s Grotto was THE place to have breakfast with princesses. It cost a king’s ransom, but you are guaranteed one on one interactive time with the princesses. I promised my kids. I went to book the reservation and…it was closed…indefinitely. I had not realized Ariel’s Grotto was part of the bigger Paradise Pier renovations. I had to tell the kids that breakfast with the princesses was out. All were disappointed, but we looked at all the other options. Breakfast with Mickey and Friends quickly became the concessions among everyone. This was the only one to guarantee Mickey and Minnie, and was said to have guest appearances by Stitch. Reservations were made, we were ready.

We scheduled an 8:30 AM breakfast figuring we would be done before the 10:00 AM open of Disney California Adventure Park. Breakfast with Mickey is in the Disney’s PCH Grill at the Disney Paradise Pier Hotel. When you arrive, you check in with the host. When called, you are brought up front to meet with Mickey, the main guy himself. There he met one on one with all the families that came in. He gave out hugs, signed autographs, and took pictures.

You get to meet Mickey as soon as you enter

Afterward we were seated at our table. Our server came over and took our drink orders, and instructed us that we could go up and get breakfast from the buffet at any time. We took the kids up and they quickly drifted toward the Mickey waffles, chocolate chip pancakes, and table full of sweet pastries. These kids clearly don’t count their carbs. I went toward the made-to-order omelet bar, and filled up the rest of my plate with delicious smoked salmon and tomatoes, hash browns, bacon, and fruit. Also, thankfully, the coffee was bottomless. 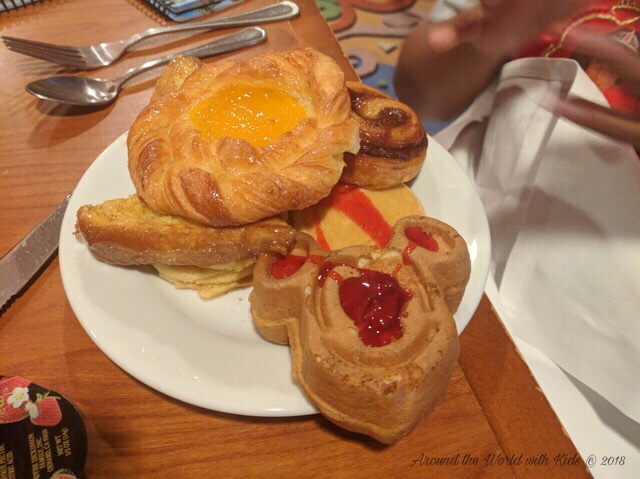 But of course, while the food was a part of the deal, the real reason to be there was the characters. That morning Minnie, Daisy, and Stitch came around the dinning room. They stopped at each table, signed autographs, took pictures, and hugged the kids. The kids loved all the individual attention and were so happy seeing them around the room. My favorite had to be Stitch, who was so…Stitch. He came over and knocked down the salt, tried to hide napkins, and even pretended to lick my face. He was the most in character of all. 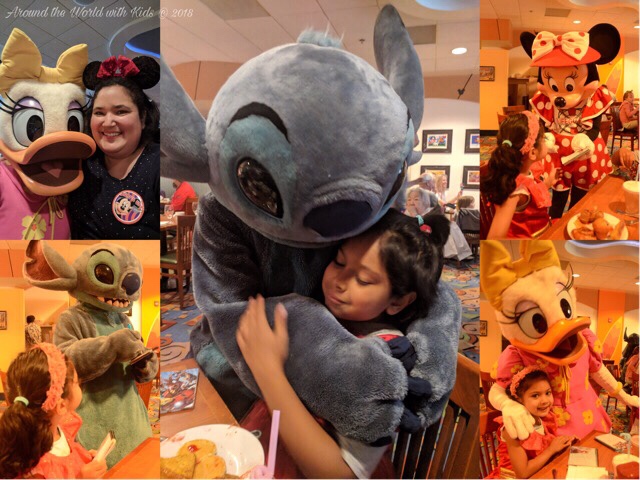 Meeting and greeting some friends*

However, its not just eating and meeting. Every hour or so, they have a dance party up front. Two or three characters lead the kids in dancing. My son was shy but my daughter never is. She went right in front, dancing away, and made sure to get her due attention with Daisy, Minnie, and even danced solo with Stitch!

My daughter has no issues getting up and dancing with anyone!

However, soon enough all the food was eaten, the photos were taken, the characters all hugged, and it was getting close to time for the park to open its gates. So we paid our bill, gave Mickey a wave good-bye, and headed out the door to check out California Adventure Park.

This was a stop during our Great Southern California Adventure

4 thoughts on “Breakfast with Mickey and Friends”